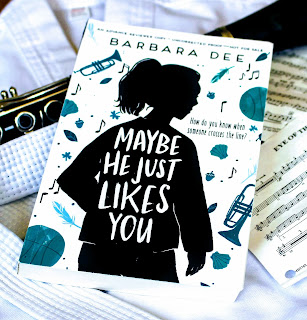 Why I chose this book:
I would like to expand my coverage of chapter books, so when the opportunity arose to review such a timely book, I was delighted. A review copy was provided in exchange for an honest review.

Seventh grade Mila is being sexually harassed by a group of boys at school. They have a "game" in which they score points for touching her, making obscene comments to her, and the like.
Mila's uncertainty is what rings so true. How do you know when someone crosses the line? Are you being overly sensitive to something that's just a joke? While Dee's novel does not offer concrete answers, it does follow Mila's experience, her friends' reactions, and the boys' escalating harassment with an authenticity that ever-critical middle-schoolers will likely appreciate. Discomfiting and frustrating as Mila flounders in her indecision, Maybe He Just Likes You forces readers to confront a victim's experience of sexual harassment. At first, Mila is uncomfortable and confused by her harassers'  treatment. As it escalates, however, she knows that they have crossed the line, but she is too uncomfortable with the situation to do much about it. Her mother knows nothing, the teachers do not see it happen, and her friends' reactions run the gamut. On the one end, Zara wants to know what Mila is doing to invite these flirtations; Zara seems almost jealous of the attention. On the other end, Max urges Mila to instantly report the bullying to the vice principal; he urges her again and again throughout the book, offering to go with her.

Eventually, and unrelated to the harassment, Mila joins a trial karate class. A fellow bandmember who has been in the karate class encourages her, and Mila enjoys the experience, so she continues to attend the class. Over the course of the novel, Mila gains some confidence, but she is still fearful of the boys. Ultimately, she brings a tormentor's wrongs to center-stage, quite literally, when she sabotages his solo at a band concert, leading her teacher to investigate the impetus for Mila's outburst. Mila then finds two unexpected allies; that band teacher who had been harassed herself, and another band member who had been the boys' previous target. A community meeting finally brings an end to the behavior. One boy is truly remorseful; he knew he was wrong the whole time. One boy's eyes are opened; he regrets the personal hurt he caused and is respectful from then on. Two boys simply stop; they do not seem remorseful, but they seem to know that further "games" aren't worth the consequences.

After reading Maybe He Just Likes You all in one day, I feel a bit in a muddle . This is timely, certainly. It's a page turner, but it also made my stomach turn. Overall, I must say that it is well worth reading. Victims and bystanders can identify with Mila and her friends, though Mila is more than just a victim in this book. She is a complex character with whom this reader alternately identified (ah, the joys of band), wanted to befriend (as my middle-school self), and found humorous to read about (did she turn into a "plaid-wearing person"?).

Everything about Maybe He Just Likes You feels authentic. I would suggest it for middle-schoolers. Girls or boys who are witnessing or experiencing sexual harassment may feel more empowered to act or speak out, having seen a similar situation play out in a well-written and compelling novel that is filled with characters that will resonate with readers.
chapter books middle grade YA 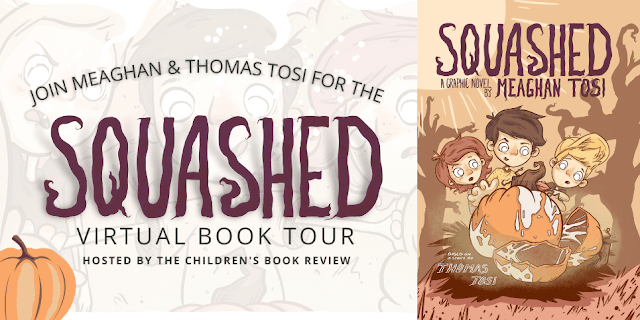 Blog Tour Book Review and Giveaway Squashed A graphic novel by Meaghan Tosi Based on a story by Thomas Tosi Published by Dooney Press Review What begins as a minor sibling altercation, quickly turns to a fear-inducing episode. After playing keep-away with his little sister's teddy bear, an older brother discovers an odd-looking, warm pumpkin guarded by a trio of scarecrows.  Shortly after taking the pumpkin home and incubating it, the boy is disturbed by a scarecrow bursting into his home in search of the pumpkin. Frozen with fear, he cannot react. It is the little sister, previously the victim of the brother's shenanigans, who comes to the rescue with her quick thinking.  Almost-wordless images fill one's field of vision, evoking visceral responses. Readers are in for a whirlwind of feeling as the teddy bear is lost, the pumpkin is found, the scarecrow appears, and the baby is discovered. Perfect for fall, Squashed  is filled with autumn colors and a spooky undercurrent. I 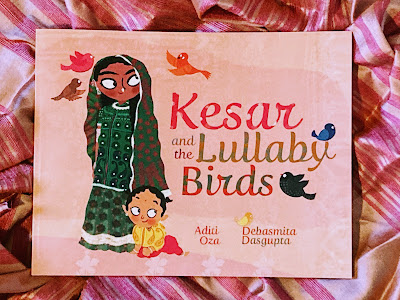 Kesar and the Lullaby Birds Written by Aditi Oza Illustrated by Debasmita Dasgupta Published by Yali Books, May 31, 2022 Review The final sentence of the author's note couldn't be better timed for us. Oza writes: After you read this book, I would love for you to thread a needle, design a motif or two, and create your very own fabric bird dangler. T has been asking to learn crochet, and the author's invitation amplifies his excitement to try out the art form! Kesar and the Lullaby Birds  is gorgeous. Yali Books had been posting images of the illustrations on Instagram, and their beauty caught my eye. When our review copy arrived in the mail, T was excited to read it to himself before we even had a chance to read it together. The story is sweet - a little girl is delighted to receive a gift from her visiting grandmother (T sure identified with that scenario!) and enjoys the story that her grandmother tells to accompany the gift of fabric birds. When Kesar's little sister,